StarCraft Wiki
Register
Don't have an account?
Sign In
Advertisement
in: Heroes of the Storm, Nerazim factions

Their warriors are distinguished by the shadow scythes they wield and the heavy armor they wear.[1] Their hunters frequently dress in zerg bones.[2] The Dark Templar were battle-hardened due to the zerg invasion of Shakuras, and some wear the bones as trophies.[3]

Since their arrival on Shakuras, Zer'atai were renowned as great hunters. For nearly a millennium, they wandered across Shakuras, fashioning intricate armors from the bones of their prey.[4]

A Zer'atai skin for Zeratul named "Zerg Hunter Zeratul" is available in Heroes of the Storm. It description makes reference to the Zer'atai. Artanis has a Nerazim skin tint named "Zer'atai."[4] 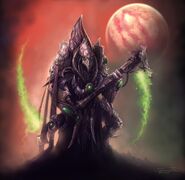 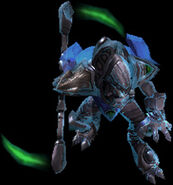 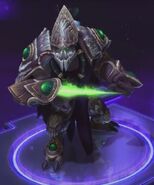