Edit
watch 02:46
The Quarry - The Loop
Do you like this video?
Play Sound
"I been in plenty of hold-outs before..."
"Not against the zerg, you ain't."

Hold out until extraction.

Zero Hour is the third terran mission of StarCraft II: Wings of Liberty.

Raynor's Raiders prepared to leave Mar Sara with the "liberated" alien artifact. However, they were suddenly besieged by invading zerg. The rebels held out until Hyperion evacuated them.[1]

The stolen alien artifact was transported by truck back to Backwater Station. The trip was uneventful despite fears of Terran Dominion pursuers. The Raiders' timing was impeccable. As they neared Backwater during the night, zerg spores began landing at the abandoned dig site. The infestation spread rapidly to the outskirts of Backwater within an hour. Pockets of Mar Sara Separatist troops desperately held out in hope of relief.

The Raiders immediately requested support and evacuation from their mobile base and headquarters, the battlecruiser Hyperion. For the second time in five years, Jim Raynor was fleeing Mar Sara in the face of a zerg invasion.[1]

The Raiders were entrenched in a defensible position accessible from the ground by only two bridges. The rebels received regular appeals for help from terrans in the area. The zerg attacked from nearby nests and were reinforced by sacs and nydus worms.

As dawn broke, the zerg made a final large scale push. The Raiders were saved by the timely arrival of Hyperion. The ship finished re-entering the atmosphere nearby and blunted the immediate threat with its weapons.[1] The Raiders had boarded by 06:21.[2] 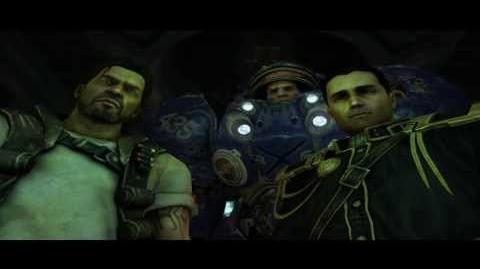 Hyperion fought through mutalisks to make the warp jump from within the atmosphere. To his horror, Raynor learned the zerg attack was part of a larger, sector-wide invasion. The Queen of Blades was on the move. The Second Great War had begun.[2]

The Raiders received a distress call from Agria, but was also given a lead on a job by Tychus Findlay. The Raiders could take one job, leaving the other for later.[3]

Neutral buildings outside the base provide vision. These are destroyed by the zerg on hard or brutal difficulty levels. Occasionally, trapped militia forces consisting of marines and medics request help. Once rescued, they come under player's control.

On hard or brutal difficulty levels, the enemy is better equipped and more aggressive, requiring stronger defenses. Enemy receives armor and weapons upgrades, sends roaches (and banelings on brutal) against the player, expands creep across the map and moves spine crawlers forward, and periodically bombards the player's base with sacs that release zerglings and creep tumors. As the zerg swarm from all sides, it may be beneficial to abandon the bunkers on the two bridges early in the mission and instead focus on the main ramp leading into the base, as defenses can be focused there.

Several dozen marines and at least eight medics are required to unlock the achievement of destroying four hatcheries on hard difficulty level. When attacking zerg bases up ramps, move the marines up several steps to allow marines in the rear to fire.

For the achievement "The Best Defense..." where you must destroy four hatcheries, aim to have three bunkers with supporting missile turrets and blocking supply depots by ten minutes. Use three barracks, two with reactors and one with a tech lab, to assemble a force with 5 marines for every medic; aim to have the army ready with 8 minutes remaining. Continue building more troops to reinforce the attack. Attack the north-east zerg base with three hatcheries, then move west and attack the middle base from the high ground. Ignore other buildings to destroy the single hatchery there.

Alternatively, attack the western base with two hatcheries. There are fewer defenses here. If done early, the zerg will rebuild the hatcheries, allowing them to be destroyed again.

For the achievement "Hold the Line," it is critical to hold the bridges and thus they must be heavily reinforced. Do not build structures below the missile turret to the right of the western bridge, or in the center of the northeastern bridge; multiple nydus worms emerge in these spots in the ending cutscene and destroy structures above. Note that structures lost during the ending cutscene count toward this achievement.

The following achievement was removed during development.

On the BlizzCon 08 version of the "Escape from Mar Sara" cinematic, Matt Horner updates Jim Raynor of the situation while the Hyperion is still travelling through warp space.[5]

Zero Hour shares a similar premise to the third StarCraft mission, Desperate Alliance. Both are holdout missions with two entrances to the main base. In addition, both are the third mission of their campaign, and both are set on Mar Sara.

A tauren marine may be found at the central upper section of the map, in between the zerg bases. It disappears into a "tauren outhouse" when approached. When clicked several times, the tauren outhouse lifts off and flies into space. Regardless of whether the player finds the tauren marine or not, a flying outhouse can be found out the airlock of the armory, in background of the mission "Maw of the Void," and out the window of the bridge.